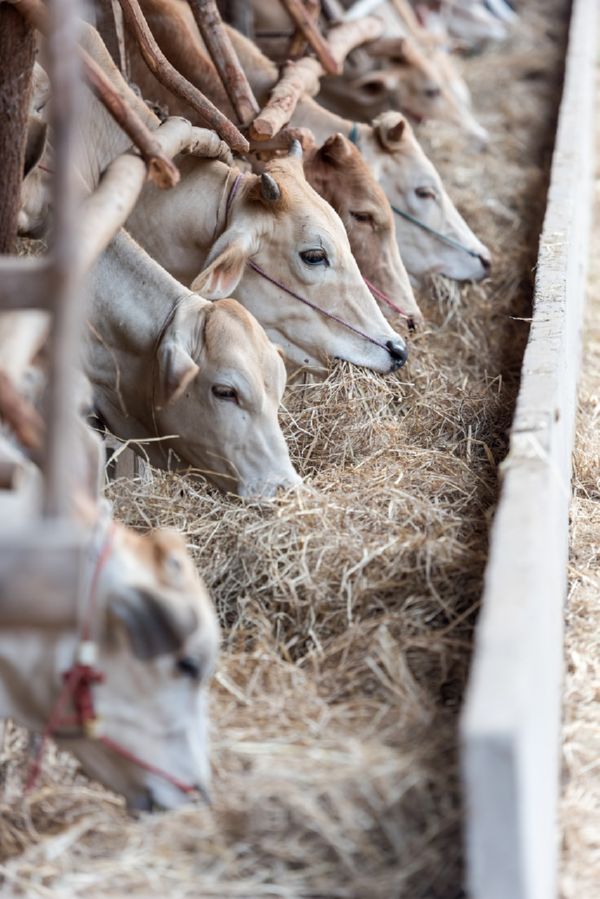 Believe it or not city slickers. Cattle ranching remains an essential business with almost 27 billion pounds of beef consumed each year. All that ground round needs to be fed by someone.

If you’re thinking about entering this industry, our experts organized some of the best cattle feed company name ideas still available. Click the category link below to jump the section that best aligns with the vision for your brand.

Cattle feed brand names need to compete in a market where the competition is well entrenched and building loyalty with generations of ranchers. As a result, you’ll need a brand name that stands out from the herd.

Just like food for humans, organic livestock feed is becoming more widely available as well. This feed will cost a bit more, but using this type of feed also offers ranchers the opportunity to pass the cost along to their customers by positioning the beef as a premium to other farms.

Chicken feed is another option to provide ranchers.

General livestock feed businesses can produce fodder for cattle, sheep, pigs, poultry, and even pets. The wider the range of food means much larger sales and revenue potential. Just make sure the brand name matches the segment you intend to serve. Here are some ideas.

These are the established companies.

There are thousands of small and corporate livestock feed companies around the world. Here are the top 30 feed companies from the United States (in no particular order) to inspire your venture.

India actually has a very few cattle feed manufacturers and this is a fairly open market with gaps to be filled. So if you’re considering opening up a cattle feed company in Indian, we have a list of catchy name options.

Is the cattle feed business profitable?

There are literally thousands of cattle feed companies operating around the world. In the United States alone, the cattle feed market is valued at $74 billion. This is a legitimate industry that isn’t going anywhere as long as humans continue consuming beef, chicken, and other animal protein.

Of course if you really want to make money in this industry it comes down to scale. While the revenue of these companies is impressive, these businesses only make sense if you’re able to scale to sell tens of thousands bags of fees annually to turn a respectable profit after expenses.

Take for example a 50 pound bag of Producer’s Pride Cattle Cubes from Tractor Supply Co. sells for $12.49 at the time of writing. While it’s impossible for us to know exactly what the profit margin is per bag, you can bet that it’s low. We’re talking well under a dollar per bag low. This means you’ve got to think about starting a feed business with enormous volume for this to be a viable venture.

As with any other farming-related industry, it has its off seasons, but in general, if you can produce and store the feeds, and include Green fodder grown vertically via hydroponics. This can help increase yield up to seven times. This can help you manage to produce quality feeds even in dry spells.

Up close and personal.

More than 74 million tons of feed is consumed by cattle each year in the United States. These herds are fed by 5,715 mills that produce livestock feeds across the country.

Responsible for some 944,000 jobs in America today, the industry is responsible for paying over $56 billion in wages every year and accounts for $22.5 billion in local, state, and national taxes, according to the American Feed Industry Association (AFIA).