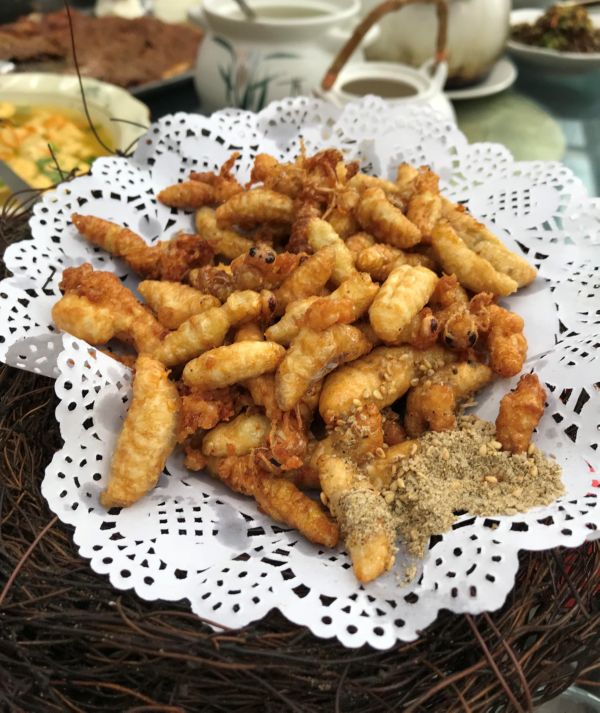 Food in China is a deeply ingrained part of Chinese culture. And with 56 legally recognized ethnic groups, there are hundreds of distinct recipes and flavors representing the country rapidly approaching 1.4 billion people. The largest group in mainland China are known as Han making up 92% of the total population. The flavors and dishes we are most familiar with stateside are influenced by Han cuisine. But Chinese food is actually more diverse than you might realize, evolving for several millennia of the countries history.

There are considered to be eight major cuisines in China, including Sichuan, Cantonese, Jiangsu, Shandong, Fujian, Hunan, Anhui, and Zhejiang. Dishes like chicken fried rice are mainstream, but there are many meals and snacks viewed as unusual to Westerners. Some people half-jokingly state China is a country that eats everything that moves and many things that don’t. Let’s explore some of the lesser known facts about Chinese food you may not know.

1. Dim Sum is roughly translates to “small portion of food” and can refer to desserts and pastries. Dim Sim are Chinese-inspired meat and vegetable dumpling-style snack foods invented in Australia.

2. Rice is not the staple food across all of China. There is a North and South divide that splits cultural customs and food. In the North, the dry climate is better for growing wheat and millet so the staple diet is noodles. In South China, rice is the staple food item grown and consumed.

3. All eight of the Chinese cuisines try to achieve balance in the dishes between meat and vegetables. Chinese dishes are designed to provide the right amount of nutrition the body needs and the invention of steaming in China helps make the cuisine one of the healthiest diets on the planet.

4. Gastronomy was already considered an art form by the late Zhou period around 250 B.C. This is when Confucius wrote the Principles of Dining. This proverb stated, “The rice would never be too white, the meat would never be too finely cut.” “There is no limit for alcohol, before a man gets drunk.”

5. Ancient Chinese milk didn’t come from cows. Instead a traditionally fermented dairy product known as “kumis” is mare or donkey milk. No wonder there is a higher rate of lactose intolerance in China compared to other parts of the world.

A variety of Asian inspired dishes.

6. Rice was initially only grown in South China and Northern inhabitants grew ancient grains like millet. Noodles were not invented until around 2,000 B.C.

7. Tofu-making was first recorded during the Chinese Han dynasty some 2,000 years ago. Chinese legend ascribes its invention to Prince Liu An (179–122 B.C.) of Anhui province.

8. Deep-fried Lotus root sandwiches are a delicacy that originated in Guangxi on the Southern China on the border with Vietnam. The sandwiches are made from sliced lotus root with shredded pork that’s floured and pan fried.

9. Luosifen, literally translated as “snail noodle soup” is made from the stock of stewed river snails and pork bones. The soup is served with rice noodles and a plethora of spices. Interestingly, the soup does not contain any snail meat, only the stewed snail stock.

10. Shiny dark grey or black, century eggs, or Pídàn, were invented during the Ming Dynasty as a cure for hoarseness and a hangover cure. Made from raw duck eggs, the Pídàn are made by setting the egg in a mixture of clay, ash, salt, quicklime, and rice husks for several weeks until cured into a dark brown (the white) and green (the yolk) jelly with a salty flavor. Let us know how this traditional hangover cure works out after the next evening out on the town!

11. Fried Bee Pupae, known as Yóu zhá fēng yǒng, are rich in proteins and low in fat. Found in several areas of Southwest China, including Yunnan Province, pupae are fried until golden on small sticks. Other fried insects are used as snack foods in China and may include spiders, black beetles, centipedes, scorpions, and grasshoppers.

12. China is renowned for its unusual meats, including both dog and cat, which are regularly eaten, and even have their own festivals. The “Lychee and Dog Meat Festival” is an annual festival held in Yulin, Guangxi province. The eating of dogs dates back to the 5th Century B.C. when the mythological ruler Fu Xi is said to have first domesticated the animals for meat. According to legend, the ruler domesticated the pig, ox, goat, horse, fowl and dog.

13. Wild animals are another food source in China. Common snakes, lizards, bats and the pangolin, a scaly anteater have been delicacy in Asia for centuries. Over the centuries, the range of wild animals eaten covers almost every animal in China, including beavers, baby crocodiles, porcupines, turtles, exotic birds, camels, badgers, wolf pups, foxes, palm civets, and many more.

14. One of the few animals that have never been considered food in China is the rare Giant Panda. Regarded as a mythical beast for centuries, and seen as a symbol of friendship and peace, the Giant Panda has been hunted for its fur, but never eaten.

15. Szechuan Peppers spice up many of the dishes from the Sichuan Province, where the peppers get their name. A hot and spicy is the order of the day with Szechuan cuisine, which has become well known in the Western world.

16. “Husband Wife Lung Slices” is not cannibalism, which you’ll be relieved to hear is actually not allowed in China. Instead this is a thinly sliced bovine lung, tongue, or some other cut, seasoned with chili oil.

17. Field Chicken may sound like a delicious free-range organic dish, but that’s not what the name implies. In China, Field Chicken refers to frogs, which are considered a delicacy in the Southern part of the country.

18. Cockroaches are one insect that most people in the United States would never consider eating. But in China this hardy bug is used in Traditional Chinese Medicine as an animal feed. The meal is even viewed as a delicacy in certain restaurants of the Sichuan Province. Part of the Chinese “Compendium of Materia Medica” cockroaches have been consumed since the late 16th century for a variety of ailments, including stomach ulcers, respiratory tract problems, sore throat, tonsillitis, liver cirrhosis and fluid build-up.

Chop suey cooking in a wok.

19. Chop Suey, a classic Chinese dish widely recognized in the United States is believed to have been invented in America. However, it has been traced by anthropologists to have originated from the common dish of “tsap seui”, which roughly translates to “miscellaneous leftovers.” Yum!

20. Most Chinese food overseas is nothing like it is inside the borders of China. In both the United States and Europe, Chinese dishes have been adapted to suit the local taste and flavor. Dishes such as General Tso’s Chicken have no basis in traditional Chinese cuisine. Popular dishes that are representative of traditional Chinese cuisine include Peking Roast Duck and Kung Pao Chicken.

21. Traditional Chinese cuisine is about the steadiness and balance between fruits and vegetables known as “Yin” foods and meats called “Yang” foods. This balance is necessary for a healthy mind and body and is found in most Traditional Chinese Medicine.