41 Korean Food Slogans and Quotes That Will Make You Hungry 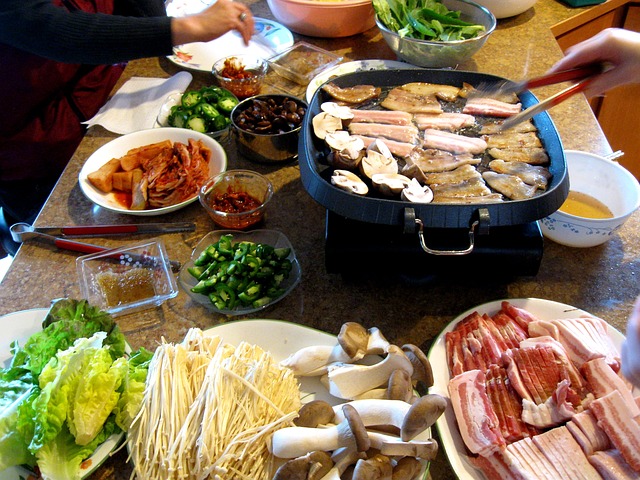 South Korea’s influence is felt around the world. From tech exports like LG and Samsung we see in the hands of consumers across the United States. Cars like Hyundai and Kia are a familiar site on U.S. roadways and the cultural presence of K-Pop becoming popular among Millennials and GenZers alike demonstrates a welcome cultural invasion of sorts. In addition to tech products and cultural, Korean cuisine has been gaining popularity the past decade. From Kimchi, Samgyupsal, to Soju, the entire a global group of foodies is discovering the best of Korean food.

In celebration of the Korean culture, here are some food slogans, quotes, and popular cuisine sure to intensify cravings. These one liners can easily be applied for use in advertising campaigns or to create compelling food captions on social media.

“I’m really happy to see the explosion of interest in Korean food, and this hybrid Korean-American food.” – Anthony Bourdain

“I definitely love kimchi. The biggest influence that eating so much Korean food growing up had on me was that I have no limit for spiciness. The hotter the better.” – Patrick Stump

“I happen to have an obsession with Korean food.” – Nina Garcia

“I love food, all types of food. I love Korean food, Japanese, Italian, French. In Australia, we don’t have any distinctive Australian food, so we have food from everywhere all around the world. We’re very multicultural, so we grew up with lots of different types of food.” – Hugh Jackman

“I love Korean food, and it’s kind of like home to me. The area that I grew up in outside Chicago, Glenview, is heavily Korean. A lot of my friends growing up were Korean and when I would eat dinner at their houses, their parents wouldn’t tell me the names of the dishes because I would butcher the language.” – Patrick Stump

“Koreans traditionally make a distinction between the “tongue taste” and the “hand taste” of a food.” – Michael Pollan, Cooked

Fermented foods contain natural probiotics or healthy bacteria, that can take your health to the next level. Nearly every culture has a version of fermented food: yogurt, kefir, miso, and fermented vegetables, including sauerkraut, pickles, and kimchi. – Sara Gottfried

I just inhaled kimchi ramen. Nose on fire. Next chapter may be obscured by tears. – MCM

“I was afraid of Korean food when I moved to L.A., let alone sushi. I remember thinking either sink or swim. Living here in Studio City, Ventura Blvd. is the Mecca of sushi restaurants. What you thought was so exotic is just run of the mill.” – Parvesh Cheena

“The first time I had sushi, I hated it. And the second time was no different, and then, I just started loving it. I actually crave for sushi. It’s one of the healthiest meals. My experiments with food began when I was working in New York as an architect, be it Korean or Ethiopian food or fusion food.” – Riteish Deshmukh

“Culture and tradition have to change little by little. So ‘new’ means a little twist, a marriage of Japanese technique with French ingredients. My technique. Indian food, Korean food; I put Italian mozzarella cheese with sashimi. I don’t think ‘new new new.’ I’m not a genius. A little twist.” – Masaharu Morimoto

“Soju, I think I’ve had enough. The gleeful embrace of mixing whiskey, rice wine, beer, and oysters, for instance. It seems to tempt the fates.” – Anthony Bourdain

“It’s everything mama warned you about. And it’s got it all, baby. And when the music’s over, your life will have changed forever.” – Anthony Bourdain on budae jjigae

“Is this so hard? Walk in and eat delicious food, and get hammered in the street? Being Korean is pretty awesome.” – Anthony Bourdain

Kimchi (fermented vegetables). Probably the most popular of them all. Kimchi is considered the oldest and most important of all Korean dishes. These fermented vegetables are usually spicy with a bit of sourness. The side dish is typically prepared with other ingredients, a Korean meal isn’t complete without Kimchi. The food is a favorite among Korean cuisine enthusiasts not just because of its distinct flavor, but also due to its nutritional value and low calorie content.

Japchae (stir-fried noodles). Japchae is known for its savory and sweet taste with a soft yet chewy texture. Japchae is a traditional Korean noodle dish typically served during lunch or dinner time. Some ingredients mixed in the noodles include beef, thinly shredded vegetables, stir-fried sweet potatoes, sugar, and soy sauce.

Related Reading: 65+ Epic Waffle Slogans and Instagram Captions That Will Make You Hungry

Bulgogi (marinated beef barbecue). Bulgogi is one of the most revered Korean meat dishes known around the world. According to a reader’s poll made by CNN in 2011, Bulgogi ranked 23rd most delicious food around the globe. Bulgogi is a juicy, grilled marinated beef that is sweet with a flavorful taste. Bulgogi is sometimes wrapped in lettuce and coated with a thick, spicy paste called ssamjang.

Samgyeopsal (pork strips). Samgyeopsal is another popular Korean dish which is basically grilled slices of pork belly that are not seasoned or marinated. These pork strips are best dipped in a seasoning made of salt, pepper, and sesame oil then wrapped around lettuce with grilled slices of garlic and onion and topped with Kimchi. Yummy!

According to reports, Korea is has more than 51 million citizens living in the country and is currently the 11th largest economy in the world in terms of GDP. The country is a member of the Group of Twenty (G20), an international forum of nations representing the 20 most powerful economies around the world. The G20 holds 90% of the Gross World Product (GWP) or about 80% of the world’s trade.

The post 41 Korean Food Slogans and Quotes That Will Make You Hungry appeared first on Food Truck Empire.